I today’s stream we added some new shaders to OBS. We also fixed an issue with the speech recognotion.

Want to add some shaders to OBS:

Todays stream brought to you by

All the wonderful people that hung out with us in chat!

A few weeks ago I was watching Gael Level on Twitch. And during his stream he had this fun effect going on where he shifted the hue of the camera. I later spoke with him about this and asked what the plugin was that he was using. It turned out there wasn’t any and he was creating the effect by hand. Since I’m a developer and don’t like repeating things, like clicking, I decided to automate this.

In OBS you can install plugins to help with various things. There is an extension to add shaders to various elements. It’s called the OBS ShaderFilter. You use this to load and execute shaders written in the HLSL language. I wrote the following shader:

Adding it to a camera

To add the shader, you’ll have to add it to a source in OBS. Just right-click a source and go to filters. Click the plus icon in the lower left corner and add a user-defined shader. Check the property to load a shader from a file and select the file containg the shader. You can tweak the properties until you have something you like. 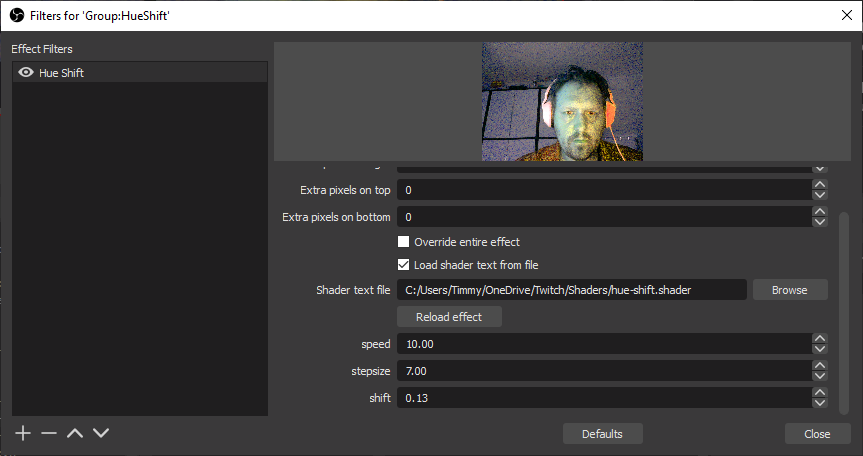 Shout out for the idea of this effect: